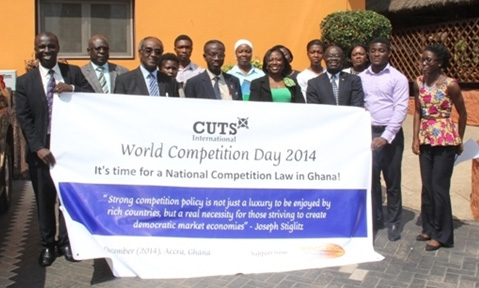 “Competition policy and law are required to check fraudulent and anti-competitive practices that affect public procurement adversely. This will result in value for money for tax payers since competition in the markets leads to quality products and services at efficient price,” said Justice Samuel Kofi Date-Bah, retired Justice of the Supreme Court of Ghana and Board Chair, CUTS Accra. This was made known at a policy roundtable discussion organized by CUTS Accra as part of activities marking World Competition Day in Accra.

Justice Date-Bah lamented that the absence of competition law in the country means that firms that engage in collusive biding, bid rigging and other anti-competitive practices affecting public procurements can get away scot-free. There are provisions in the draft Competition Bill of Ghana drafted by CUTS that will empower the Ghana Competition Commission to investigate these practices in the country.

Speaking on the theme for this year’s celebration “Competition Issues in Public Procurement,” the Centre Coordinator of CUTS Accra, Mr. Appiah Kusi Adomako said that, “the benefits derived from public procurement are not realised by most governments worldwide, due to a plethora of anti-competitive practices in public procurement and the lack of effective institutions to monitor public funds used in making purchases of goods and services.” He added that an estimated $400 billion is lost annually in due to malpractices in public procurement around the world. In Sub-Saharan Africa, it is reported that corruption exists in about 70% of public contracts, which inevitably lead to a rise in 20-30% of contracts sums”

Collins Agyeman, a procurement expert and a representative from the Chartered Institute of Procurement (CIPS) said the flagrant and needless misuse of sole sourcing methods needs to be stopped. He mentioned that presence of many bidders during the tendering process does not necessarily make the process competitive as there are instances where bidding firms collude to rig the bid. He called for a competition law in the country to tackle such practices since the Procurement Act remains sterile in dealing with such tendencies.

On her part, Grace Dzeble, the Head of Greater Accra Chamber of Commerce expressed dismay about how the PPA is handling anti-competitive practices and corruption in the entire procurement method. She urged the PPA to strengthen its monitoring and evaluation mechanism. She added that public procurement could be used as a way of beefing up capacities of local firms. She decried that majority of government contracts are awarded to foreign firms, which in effect undermines the growth of local businesses.

The World Competition Day Celebration is observed on 5th December every year by a large number of governments, to help generate awareness about the need for competition reforms. Currently, CUTS is implementing a project titled Advocating for a Functional Competition Regime for Ghana (COMPAD) with the support from the BUSAC Fund. The main goal of this project is to complement the Government of Ghana’s efforts towards evolving a functional national competition policy and law in Ghana, through an informed process, incorporating the views of key actors and with public support.

The policy round table meeting was held in Accra was attended by officials from the various ministries, academia, professional associations, civil societies and the private sector.